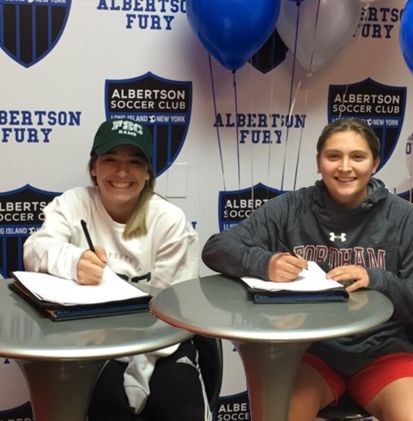 There are so many reasons why soccer players decide to attend a particular college. For some it is the closeness to home. For others it is the athletic and academic programs. And yet for other players it is the team and school environment itself. For Albertson Fury standouts Kayla Duvenhorst and Marissa Stanco, the colleges they selected to attend checked off many, if not all the boxes, on their respective lists. They were among 10 Fury players who announced their intentions on National Letter of Intent Day on Wednesday, Feb. 7.

Duvenhorst decided to attend Farmingdale State University, which is about five miles from her Levittown, N.Y. home.Ã‚

“It was the first serious college I was looking into and got the tour,” she said. “I really liked it. I liked the distance from my house. I liked the coach and I liked the facilities. It was really nice.”

It certainly did not hurt that Farmingdale has a top-flight nursing program, in which Duvenhorst plans to major.

Fordham University is a longer trip for Stanco, but its proximity fit the Glen Cove, N.Y. resident just fine. It’s about a 40-minute car ride to the Bronx college.

In so many ways — on and off the field.

“I knew it would challenge me athletically and academically,” she said, adding that on her visit, “the girls made me feel like I was at home.”

That was an important part of the mix as well.

Training with and playing for the Albertson Fury in some intense competition in the Elite Clubs National League helped prepare both players for college.

“The coaches, their training is unreal,” Stanco said. “It’s paying attention to every detail. It helps you not just on the field, but off the field as well. It’s helped my character, tremendously.”

The Albertson Fury’s success and its ability to place many players into top-flight college programs was not lost on club director of coaching Paul Riley.

The club traditionally has participated in the highly competitive ECNL for many years, which has allowed Albertson players to showcase their talents to college coaches many times.

All you need is one coach to believe in you, which can open the door to further opportunities.

“They get so much visibility, so many showcases, so many options in front of coaches,” Riley said. “I say you have 24 job interviews, I say you can’t fail 24 job interviews. You’ve got to pass one of them to get on a good school. All the college coaches follow the ECNL well.”

It’s not just showcasing your abilities. To play for the Albertson Fury in the ECNL, players must be committed and be ready to play and/or practice five times a week.

“We’re looking for a pipeline to these college coaches,” Riley said. “Our players who have graduated from the ECNL have gone on to become coaches, like Kelly Farrell. They are coaching in the college ranks.”

Riley was referring to Farrell, who is an assistant women’s soccer coach at the University of Nebraska-Omaha.

“I think they understand what we do for the players and what the preparation is for the players, whether it scholastically or physically on the field,” he added. “Time management is difficult for kids. In the ECNL we’ve done a good job that they’re all at practice. It’s five days a week and these kids got to manage their time.”