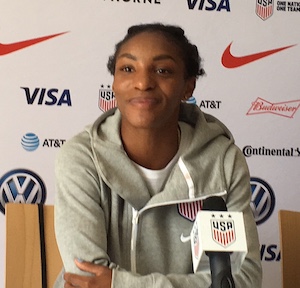 DEAUVILLE, France — If you think the U.S. is going to lose a game on purpose to get an easier route to the final in the Women’s World Cup, then think again.

No way that is going to happen, says Crystal Dunn, not with this team.

If the U.S. falls to Sweden in its final Group F match pn Thursday, it would finish second and be on a path to avoid host France in the quarterfinals. Of course, that’s assuming the defending champions win in their Round of 16 game next week.

Dunn, a Rockville Centre, N.Y. native and a former standout with the Albertson Soccer Club, doesn’t give that theory much credence.

“There is a history behind USA-Sweden. So for us, not that this is a pride thing, we want to go out thinking, we conquered a big nation. Everyone said we haven’t been tested. they did test us and hopefully we can manage all the challenges they give us.

“A lot of us would never want to take our foot off the pedal. This tournament, the way we started, is a testament of how hungry we are to want to score and hungry we are to keep the level high no matter who we’re playing. This game against Sweden we are not thinking anything other than keep that foot on the gas.”

As for its history against the Swedes in recent FIFA-sponsored competitions, the outcome has not been very flattering for the USA. The Americans are winless in their last three contests against the European side in those tournaments. That includes a 2-1 group-stage defeat in the 2011 WWC in Germany, a scoreless group-stage draw at Canada 2015 and a quarterfinal elimination at the 2016 Rio Olympics in Brasilia, Brazil. Sweden won in penalty kicks after playing to a 1-1 deadlock after 120 minutes. That result was the first time the U.S. failed to reach the semifinals of a FIFA tourney in 13 tries.

Dunn, a member of the National Women’s Soccer League champion North Carolina Courage, said the past didn’t matter because the U.S. has rebuilt its squad from three years ago.

“The Olympics, a lot of people want to go back to this game,” she said. “It was a hard-fought game and losing in PKs obviously was really disappointing. Where the team was then and where we are today is night and day. I think we were in still a partial rebuilding stage. It’s been three years since then.

“We’ve actually played Sweden since that game and where we are now as a team, we’re in form and we have 23 amazing players that are ready to set foot and make their mark on this team. I almost don’t really even think about that game.”

In its opening two matches of the 2019 WWC, the USA has outscored its opposition, 16-0 while allowing only three shots.

The Swedes, on the other hand, while a solid side, hasn’t been as imposing. They defeated Chile in their opening match, 2-0, while posting a 5-1 victory over Thailand Sunday.

“I can’t really speak as a team as to what they were like under Pia,” Dunn said. “How they play now, they’re a very organized, disciplined team, always been hard to break down. So, I think they will continue disrupting a lot of play and things like that. They’re a good team. They’re going to be a challenging team. I know that they’re going to give us their A game and we’re going to give them ours as well.”

Teammate Ali Krieger has said that the USA has the two best women’s teams in the world because of its depth.

“We literally feel we could enter a second team into this World Cup, and they would do quite well,” she said. “So, I feel like that’s just a testament on how hungry we are to want to be starters. Not being a starter on our team doesn’t mean you’re actually not a good player. It just means how competitive our roster is. We have 21 people who have made our World Cup debut. That just means that we trust everybody on the ptich, we trust everybody we’ve brought to this World Cup, and we can be dangerous and it’s not just the starting 11. It’s those who come in, it’s those who impact the game in the later minutes. I like her statement. I stand by it.”

For all you social media followers of Dunn, you might have noticed that she is going by a different last name these days. On Twitter, she is Crystal Dunn Sourbier. She married Pierre Sourbier on Long Island last December. Soubrier is the head of sports medicine and performance for the Colorado Rapids.

Dunn laughed before she was asked whether she was going to change her name professionally.

“I don’t know. My husband is very supportive of me of keeping Dunn. I think all the legal stuff is out of the way. It’s a nightmare, guys. So, you appreciate the women for doing this,” she said with another laugh.