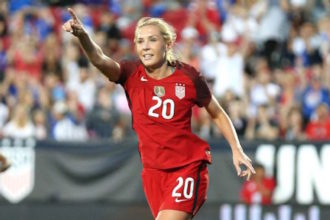 PARIS — Call it a double thrill.

Not only did Allie Long finally realize her dream of playing in a Women’s World Cup last Sunday, she also made her debut at the stadium of her former club, Parc des Princes.

The Northport, N.Y. native never played there with the Paris St-Germain women’s side at that stadium, so it still was a memorable moment.

“It was so great,” she said. “The last time I was here I was watching the men play, so it was just kind of surreal to be back here and to step on the field. It was such a cool experience.”

The former Albertson Soccer Club and Northport/Cow Harbor Soccer Club standout played for PSG during the 2011-12 season after Women’s Professional Soccer went under and prior to the advent of the National Women’s Soccer League.

Long made her World Cup debut at the age of 31, which is rather old for a player to compete in any FIFA competition for the first time.

“It was a dream of mine,” she said. “I just wanted to play. The field was perfect, and I was just really excited to get out there and enjoy every minute that I had.”

She had 31 minutes of regulation and some five minutes of stoppage time to enjoy herself after coming on for midfielder Lindsey Horan in the 59th minute of the U.S.’s 3-0 victory over Chile.

Long was one of seven new players head coach Jill Ellis inserted into the lineup as the Americans all 20 field players and 21 of their 23 players.

“We are the deepest team in the World Cup,” Long said. “I truly believe that. It’s going to take every single player to win this. So, just to get everyone’s kind of feet wet and into the game I couldn’t think of a better way to start the tournament.”

Long admitted it was a perfect way for her to get her feet wet as well.

“I feel like I’m always a composed player, but obviously the world stage is a different beast,” she said. “I loved it. So, it’s really important, just to get touches, just to get the debut out of the way and just focus on the game.”

Long was fouled by Yessenia Huented so close to the penalty area in the 80th minute that referee Riem Hussein needed to use the Video Assistant Referee to determine whether it occurred inside the box. She ruled it was.

“She held me and I felt it, so I love VAR today,” Long said with a laugh.

Lloyd took the ensuing penalty, but missed her chance at another WWC hat-trick by shanking her attempt wide left of goalkeeper Christiane Endler.

“Any chance she misses she’s going to be disappointed,” Long said. “She’s at the top of her game right now. She’s a goal-scoring machine. She’s mature enough to let that PK and put it in the black box and move on.”

While she was glowing after her debut, Long realized she would be critiqued by her bigger critique — her husband, former Molloy College standout and U.S. youth international Jose Batista. Batista will watch his Long live against Sweden in Le Havre Thursday and stay for the rest of the tournament. Well, as long as the U.S. remains alive.

“I can’t wait,” Long said. “Of course, he watches every single game. Probably critiquing me. Can’t wait to get back to my phone to see what he said about this game. He’s probably mad about my yellow.”

Well, Long was mad about the yellow card, which was awarded for elbowing a Chilean player in the 88th minute.

“Yeah, of course, I was. Yellows obviously matter,” she said, meaning that two yellow cards in a tournament a player gets suspended for a game “I didn’t even know she was there. I was going up for a header to protect myself and just win the header. I would never purposely elbow anyone in the face.”

Yet, Long continued her physical play and was whistled for two fouls in the remaining two minutes of regulation and five minutes of stoppage time. Hussein had a few words with the veteran after one of those fouls, making some observers note that she might have been getting closer to a second yellow. Two yellow cards in a game or during the group stage of the competition will mean a player would be suspended for a match.

All the Americans need is a draw against Sweden to advance.

“Of course, we have the utmost respect for almost every team, especially Sweden,” she said. “They’re a quality team and it’s going to take one through 23 to beat them and any team going forward.”